In the next few articles, I’ll be writing about the epidemic of gastroesophageal reflux disease (GERD) and its mismanagement by the medical establishment.

In this first article I will present evidence demonstrating that, contrary to popular belief, heartburn and GERD are caused by too little (not too much) stomach acid. In the second article I’ll explain exactly how low stomach acid causes heartburn, GERD and other digestive conditions. In the third article I’ll discuss the important roles stomach acid plays in maintaining health and preventing disease, and the danger long-term use of acid suppressing drugs presents. In the final article, I’ll present simple dietary and lifestyle changes that can eliminate heartburn and GERD once and for all.

Want to learn more about Heartburn and GERD?

Discover the little-known causes of heartburn and GERD, and find out how to get rid of the problem forever.

I hate spam, too. Your email is safe with me. By signing up, you agree to our privacy policy.

Heartburn and GERD Are No Joke

According to the National Institute of Diabetes and Kidney Digestive Diseases, sixty million people experience heartburn at least once a month and twenty five million experience symptoms daily.

Gastroesophageal Reflux Disease (GERD), a more serious form of acid reflux, is the most common digestive disorder in the United States. Studies show that 10-20% of individuals experience symptoms at least once a week, and prevalence of GERD is increasing steadily.

Drugs for acid reflux and GERD are cash cows for the pharmaceutical companies. More than 60 million prescriptions for GERD were filled in 2004. Americans spent $13 billion on acid stopping medications in 2006. Nexium, the most popular, brought in $5.1 billion alone – making it the second highest selling drug behind Lipitor.

As sobering as those statistics are, it’s likely that the prevalence of GERD is underestimated because of the availability of antacids over-the-counter. This permits patients to self-medicate without reporting their condition to a doctor.

Up until fairly recently heartburn wasn’t taken too seriously. It’s primarily been the butt of bad jokes about Grandma’s cooking. But we now know that heartburn and GERD can have serious and even life-threatening complications, including scarring, constriction, ulceration, and ultimately, cancer of the esophagus.

Recent studies also show that the damage from poor stomach function and GERD not only extends upward to the sensitive esophageal lining, but also downward through the digestive tract, contributing to Irritable Bowel Syndrome (IBS) and other gastrointestinal problems. IBS is now the second-leading cause of missed work, behind only the common cold.

Problems with the Conventional Theory

If you ask the average Joe on the street what causes heartburn, he’ll tell you “too much stomach acid.” That’s what most of the ads seem to suggest too. I’m sure you’ve seen pictures like the one at the top of this post in ads for acid suppressing drugs on TV and in magazines.

But there’s a big problem with this theory: the incidence of heartburn and GERD increases with age, while stomach acid levels generally decline with age (Fig 1).

Figure 1. Mean stomach acid secretion from the second to the eighth decade. (from Wright, 2001 p.20) 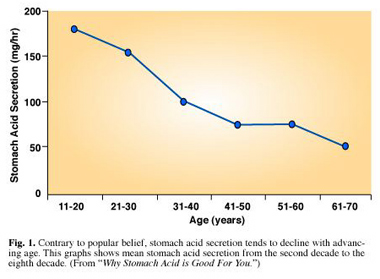 Just as studies show acid secretion declines with age, it is also well established in the scientific literature that the risk of GERD increases with age.

If heartburn were caused by too much stomach acid, we’d have a bunch of teenagers popping Rolaids instead of elderly folks. But of course that’s the opposite of what we see.

In fact, according to Jonathan Wright, MD of the Tahoma Clinic in Washington state, when stomach acid is measured in people suffering from heartburn and GERD it is almost always low, not high. In his book Why Stomach Acid is Good For You, Wright explains:

When we carefully test people over age forty who’re having heartburn, indigestion and gas, over 90 percent of the time we find inadequate acid production by the stomach.

In Wright’s 25 years of conducting these tests, he found very few people with excess stomach acid. Excess stomach acid is only found in a few rare conditions like Zollinger-Ellison syndrome), and GERD is hardly ever associated with too much stomach acid.

What’s more, Wright and other clinicians have found that giving hydrochloric acid supplements to patients with heartburn and GERD often cures their problem:

In 24 years of nutritionally oriented practice, I’ve worked with thousands of individuals who’ve found the cause of their heartburn and indigestion to be low stomach acidity. In nearly all these folks, symptoms have been relieved and digestion improved when they’ve taken supplemental hydrochloric acid and pepsin capsules.

My own clinical experience confirms this. So far every patient I’ve had with heartburn or GERD has responded well to hydrochloric acid supplementation. We’d expect just the opposite to be true if these conditions were caused by too much stomach acid.

A Symptom Is Not a Cause

When I explain to patients that GERD is caused by not enough stomach acid, rather than too much, they are initially doubtful. “If that’s true”, they say, “then why do my antacid drugs provide relief?”

I’m not denying that the symptoms of heartburn and GERD are caused by stomach acid refluxing into the esophagus. Nor am I arguing that reducing or eliminating stomach acid with drugs doesn’t relieve those symptoms.

What’s crucial to understand is that any amount of acid in the esophagus is going to cause problems. That’s because its delicate lining isn’t protected against acid like the stomach lining is. You don’t have to have excess acid in your stomach to have heartburn.

Also, symptom relief doesn’t imply that the underlying cause of the problem is being addressed. Too often western medicine focuses on suppressing symptoms without paying attention to what is causing the symptom in the first place.

The misguidedness of this approach is clearly demonstrated by the use of acid inhibiting drugs to treat heartburn and GERD – problems which are caused by not enough stomach acid!

The Consequences of Ignoring the Cause

As I wrote above, Americans spend more than $13 billion on acid stopping drugs each year. This expense might be justified if antacid drugs were actually curing heartburn and GERD. But just the opposite is true. Not only do these drugs fail to treat GERD, they will make the underlying condition (not enough stomach acid) worse. This virtually necessitates the lifelong use of these medications for anyone who takes them.

While this is a nifty sales strategy for the drug companies, it’s a bitter pill to swallow (yes, pun intended) for those suffering from heartburn and GERD.

Curing a disease means eliminating its cause. When a disease is cured, the symptoms don’t return once the treatment is removed. This of course is not the case with drugs for heartburn and GERD. As soon as the patient stops taking them, the symptoms return. And often they’re worse than they were before the patient started the drug.

Unfortunately, pharmaceutical companies aren’t interested in cures because they aren’t profitable. It’s much more lucrative to sell drugs that people have to take for the rest of their lives than it is to promote dietary or lifestyle changes that would cure the problem.

Therefore, although the drug companies are well aware that GERD isn’t caused by too much stomach acid and that low stomach acid causes serious health problems and complications, they continue to sell billions of dollars worth of antacids to an unsuspecting public. Even worse, these powerful drugs are now available over-the-counter with no warnings about the dangers they present.

Note: if you think this sounds strangely like the situation with the #1 selling drug, Lipitor, you’re correct. Lipitor arbitrarily lowers cholesterol across the board, even though evidence clearly indicates that high LDL cholesterol is not the cause of heart disease. What’s more, low cholesterol is associated with greater risk of death in the elderly population. Something is definitely wrong with our “healthcare” system when the #1 and #2 medications are actually contributing to the conditions they’re supposed to treat. But I guess if you’re looking at it from the standpoint of the drug companies, who are in business to make a profit, it’s the perfect business model.

In the Part II I explain exactly how low stomach acid causes heartburn, GERD and other digestive conditions. We’ll also look at the primary causes of low stomach acid, and how you can prevent this condition from occurring. Read on!