Save $1,000 on the ADAPT Practitioner Training Program: Enroll now
Facebook4.9kTweetPin892LinkedInPrint

In the last article we discussed the problems humans have converting omega-3 (n-3) fats from plant sources, such as flax seeds and walnuts, to the longer chain derivatives EPA and DHA. Since EPA and DHA (especially DHA) are responsible for the benefits omega-3 fats provide, and since EPA and DHA are only available in significant amounts in seafood, it follows that we should be consuming seafood on a regular basis.

But how much is enough? What does the research literature tell us about the levels of EPA and DHA needed to prevent disease and ensure proper physiological function?

I’m going to answer this question in detail in the next article. But before I do that, I need to make a crucial point: the question of how much omega-3 to eat depends in large part on how much omega-6 we eat.

Over the course of human evolution there has been a dramatic change in the ratio of omega-6 and omega-3 fats consumed in the diet. This change, perhaps more than any other dietary factor, has contributed to the epidemic of modern disease.

The historical ratio of omega-6 to omega-3

Throughout 4-5 million years of hominid evolution, diets were abundant in seafood and other sources of omega-3 long chain fatty acids (EPA & DHA), but relatively low in omega-6 seed oils.

Anthropological research suggests that our hunter-gatherer ancestors consumed omega-6 and omega-3 fats in a ratio of roughly 1:1. It also indicates that both ancient and modern hunter-gatherers were free of the modern inflammatory diseases, like heart disease, cancer, and diabetes, that are the primary causes of death and morbidity today.

At the onset of the industrial revolution (about 140 years ago), there was a marked shift in the ratio of n-6 to n-3 fatty acids in the diet. Consumption of n-6 fats increased at the expense of n-3 fats. This change was due to both the advent of the modern vegetable oil industry and the increased use of cereal grains as feed for domestic livestock (which in turn altered the fatty acid profile of meat that humans consumed).

The following chart lists the omega-6 and omega-3 content of various vegetable oils and foods: In fact, Americans now get almost 20% of their calories from a single food source – soybean oil – with almost 9% of all calories from the omega-6 fat linoleic acid (LA) alone! (PDF)

This reveals that our average intake of n-6 fatty acids is between 10 and 25 times higher than evolutionary norms. The consequences of this dramatic shift cannot be overestimated.

As you may recall from the last article, n-6 and n-3 fatty acids compete for the same conversion enzymes. This means that the quantity of n-6 in the diet directly affects the conversion of n-3 ALA, found in plant foods, to long-chain n-3 EPA and DHA, which protect us from disease.

Several studies have shown that the biological availability and activity of n-6 fatty acids are inversely related to the concentration of of n-3 fatty acids in tissue. Studies have also shown that greater composition of EPA & DHA in membranes reduces the availability of AA for eicosanoid production. This is illustrated on the following graph, from a 1992 paper by Dr. William Landis: 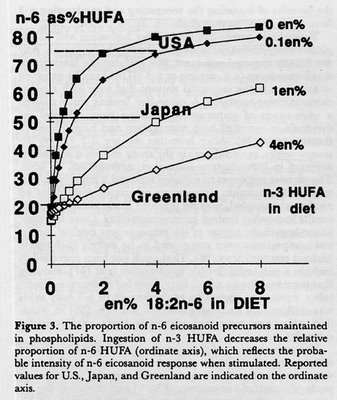 Since we get close to 10% of our calories from n-6, our tissue contains about as much n-6 as it possibly could. This creates a very inflammatory environment and goes a long way towards explaining why 4 in 10 people who die in the U.S. each year die of heart disease.

(Note: the ratio of omega-6 to omega-3 matters, but so does the total amount of each.)

Big Pharma is well aware of the effect of n-6 on inflammation. In fact, the way over-the-counter and prescription NSAIDs (ibuprofen, aspirin, Celebres, etc.) work is by reducing the formation of inflammatory compounds derived from n-6 fatty acids. (The same effect could be achieved by simply limiting dietary intake of n-6, as we will discuss below, but of course the drug companies don’t want you to know that. Less profit for them.)

As we discussed in the previous article, conversion of the short-chain n-3 alpha-linolenic acid (ALA), found in plant foods like flax and walnut, to DHA is extremely poor in most people. Part of the reason for that is that diets high in n-6 LA inhibit conversion of ALA to DHA. For example, one study demonstrated that an increase of LA consumption from 15g/d to 30g/d decreases ALA to DHA conversion by 40%.

So what are the consequences to human health of an n-6:n-3 ratio that is up to 25 times higher than it should be?

The short answer is that elevated n-6 intakes are associated with an increase in all inflammatory diseases – which is to say virtually all diseases. The list includes (but isn’t limited to):

The relationship between intake n-6 fats and cardiovascular mortality is particularly striking. The following chart, from an article entitled Eicosanoids and Ischemic Heart Disease by Stephan Guyenet, clearly illustrates the correlation between a rising intake of n-6 and increased mortality from heart disease: As you can see, the USA is right up there at the top with the highest intake of n-6 fat and the greatest risk of death from heart disease.

On the other hand, several clinical studies have shown that decreasing the n-6:n-3 ratio protects against chronic, degenerative diseases. One study showed that replacing corn oil with olive oil and canola oil to reach an n-6:n-3 ratio of 4:1 led to a 70% decrease in total mortality. That is no small difference.

Joseph Hibbeln, a researcher at the National Institute of Health (NIH) who has published several papers on n-3 and n-6 intakes, didn’t mince words when he commented on the rising intake of n-6 in a recent paper:

The increases in world LA consumption over the past century may be considered a very large uncontrolled experiment that may have contributed to increased societal burdens of aggression, depression and cardiovascular mortality.

And those are just the conditions we have the strongest evidence for. It’s likely that the increase in n-6 consumption has played an equally significant role in the rise of nearly every inflammatory disease. Since it is now known that inflammation is involved in nearly all diseases, including obesity and metabolic syndrome, it’s hard to overstate the negative effects of too much omega-6 fat.

In the next article, we’ll discuss three different methods for determining healthy intakes of n-3 that take background intake of n-6 into account.